Geneviève Morin-Dupont, a graduate in theatre from Les Muses – Centre des arts de la scène, has an impressive professional resumé. She made her debut in 1994 in the lead role of the film Un billet de loterie, a France-Québec co-production. For Les Productions des pieds des mains, she appeared in Leçons (2003), Le temps des marguerites (2006), and Pharmakon, (2011). Beloved by television audiences, Geneviève’s many appearances include Annie et ses hommes, Gang de rue, Tout sur moi and Le Négociateur. In addition to the company of Just fake it which toured to Belgium and Germany, she also participated in two earlier creations of Joe Jack and John: Quand j’étais un animal (Manuel de taxidermie) and Ce soir l’Amérique prend son bain.  As one critic described her performance in Just fake it:  “…a nerve-jangling woman of contagious energy, she pronounces a surreal election speech and sways to the music of Michael Jackson. Geneviève has more than one string to her bow. One of them: a talent for acting ” (Melina Schoenborn, Gazette des femmes). In March 2011, Geneviève received the Janine-Sutto Prize “for her exemplary artistic career”. She also participated in a clown piece created by Marie-Anik Deschamps, which was presented at the Montreal Fringe Festival in June 2012. (Photo: Glauco) 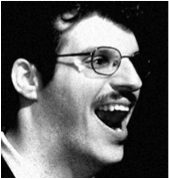 As a student at Les Muses – Centre des arts de la scène, Marc Barakat distinguishes himself by the quality of his verbal expression and onstage presence. He appeared in Ailleurs, presented by Les Muses at the Maison de la culture Mercier in March 2003, and in La Leçon (from the work of Eugène Ionesco), produced the following winter at La Chapelle by the company Des Pieds et des Mains. For Joe Jack and John he appeared in Ce soir l’Amérique prend son bain, presented at the Bain Mathieu in 2005. At the time, Le Devoir’s critic Hervé Guay wrote of Marc’s performance: “The fiery Marc Barakat plays both the host and the guest with verve.” In Go shopping (et fais le mort), Marc shared the stage with, among others, Élisabeth Chouvalidzé. More recently, he joined Pharmakon, written by Alexis Martin and directed by Menka Nagrani (Des pieds des mains), presented in 2011 at the Théâtre Gesù and in different Maisons de la culture in Montréal. In March 2012, Marc received the Janine-Sutto Prize for his artistic career. In 2012, he joined the cast of the film Gabrielle by Louise Archambault. In 2018, Marc appears in Dis merci, by Joe Jack & John, presented at Espace Libre. (Photo: Glauco.)

Anne Tremblay has been pursuing professional art training since 2014 at Les Muses : centre des arts de la scène. Among other things, she attended intensive training with Hugo Bélanger, Roger Sinha, Johanne Blouin and Annie Gagnon. She was directed by Angela Konrad in the show Fête, petites écorchures et effets presque spéciaux, presented at the Place des arts in 2017. She joins Joe Jack & John for the most recent creation, Violette.

Stephanie has many facets to her professional life: she is a theatre student at Concordia University in Montréal, bowling champion, and disability advocate. Before Concordia she attended Dawson College and Loyola University. Her presentation at the UN Headquarters in New York in March 2015 as part of the 4th World Down Syndrome Day Congress was entitled “Making Inclusion Work: Encouraging Adults with Down Syndrome Pursuing Higher Education”.

Student at Les Muses: centre des arts de la scène since 2015 where she has been learning theatre and dance, Stéphanie already has several professional experiences to her credit. Since January 2019, she has been working with the contemporary jig company Maï(g)wenn et les Orteils as part of Écoute pour voir, a choreographic concept developed by Emmanuel Jouthe/Danse Carpe Diem. In 2019, she also made her first steps on the TV sets. We saw her in Unité 9 and Léo. She first collaborated with Joe Jack and John in 2019 with their next creation, Violette. (Photo : Charles Lafrance)