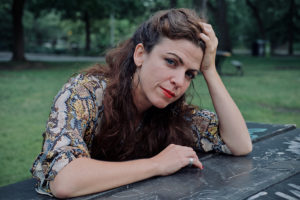 Catherine Bourgeois has been making theater since 2002. She began in set costume, and lighting design before devoting herself to creating and directing performances for Joe Jack & John, which she co-founded in 2003 and for which she designs and directs all productions. Her show AVALe earned her the Best Director award at the 2014 Gala des Cochons d’Or, as did a previous show Just fake it, in 2012. Just fake it was also awarded a LOJIQ grant.

From 2006 to 2013, in parallel with her life at JJJ, Catherine worked as production manager and assistant to choreographer Margie Gillis, and was thus introduced to many different artists, cities, and stages. For more than five years, from 2005 to 2008, she worked at Imago Theatre – where from 2005 to 2008 she was Associate Director. She also took on several other roles, including directing Théâtre La Chapelle’s award-winning 2008 production of Michael Mackenzie’s The Baroness and the Pig .

Catherine studied directing at London’s Central School of Speech and Drama, as well as set design at UQÀM and at the Option-Théâtre in Ste-Thérèse. In 2018, she won the Mid-Career Artist Prize from the Faculty of Arts Foundation at UQAM. She also teaches to students of the Acting program at the National Theatre School of Canada.

Originally from Italy, Yumi Palleschi has studied piano performance at the Fryderyk Chopin University of Music of Warsaw, Poland, and at the Southern Methodist University of Dallas, TX. She has appeared on stages in Europe, North and Central America and Asia as a soloist, in chamber music formation and with orchestra.

Over the years, she has developed an interest in arts management which has led her to work as an administrative assistant at the Accademia Internazionale dell’Opera Lirica G.Verdi in Terni, Italy, as well as to collaborate as an event coordinator with the Joaquin Achucarro Foundation in Dallas, TX. During these years she has managed programming, production and marketing of interdisciplinary events that combined music, dance, visual art and theater.

In 2019 she completed a Master of Management in International Arts Management from HEC Montreal and Southern Methodist University of Dallas, which gave her the opportunity to explore arts management practices all over the world through study abroad campuses in the US, Canada, Colombia, China, India and Italy.

Currently, she is the administrative director of the theater company Joe Jack and John, as well as a projet manager of the vocal ensemble Les Rugissants in Montreal.

Pénélope Bourque completed the playwriting program at the National Theatre School of Canada in 2013, then co-founded the collective Ce n’était pas du vin with Véronique Bossé, who directed her play Iseult&Evaelle – un beau conte d’amour et de mort in 2016 as well as her dance-theater play for children La chasse aux billes in 2017. In addition to devoting her time to writing and translation, she also collaborates with the company Joe Jack et John as a writer and dramaturg (Dis Merci, presented in 2018 at Espace Libre), and the producer of, among others, Abîmés – quatre courtes pièces de Samuel Beckett)

Sophie Bergeron specialises as a technical director and video designer. Her objective is to develop her projects to the highest level possible and her desire of accomplishment constantly pushes her towards innovation. Constantly looking for new challenges, in addition to theatre she wishes to work within museum exhibitions, immersive experiences, dance, circus and with young audiences. She is also very interested in touring in all its forms.

Before moving on to theater, she pursued a DCS in visual arts and a DPS in woodworking and furniture refinishing.

During her studies at the National Theatre School of Canada, she worked under the supervision of Simon Cloutier,  Pierre Phaneuf, Kathleen Gagnon, Victor Lamontagne, René Lavoie, Isabelle Brodeur, Gonzalo Soldi and Mathieu St-Arnaud.

Michael Nimbley has been studying theatre at Les Muses – Centre des arts de la scène since 2004. A bilingual actor (English/French), the extent of his talent was apparent in 2006 and 2008 in Le temps des marguerites, presented at Tangeante. With his ineffable charisma and singular voice, this mature actor played the lead role in Joe Jack and John’s Mimi, myself et tous ceux qui me regardent in 2009. In 2010, Michael appeared in the Cabaret Les Muses at l’Astral, playing a troubling character in an excerpt from Edward Albee’s Zoo Story alongside the actor Frédéric Lavallée, directed by Richard Gaulin. After earning his Best Actor award at the 2012 Gala des Cochons d’Or for his role in Just fake it (Joe Jack et John), he toured with the show in Rimouski, Laval, Liège and Berlin. “His onstage presence and his sincerity are disarming,” wrote Suzanne Vallières-Nolet on the website Plein Espace. Michael participated in the creation of AVALe, presented at Théâtre Aux Écuries in March 2014 and Abîmés in 2016 at Théâtre Denise-Pelletier. This last collaboration marked his fourth with Joe Jack et John, while since 2018 he is artist in residency with the company. His film credits include Eric Savoie’s Cendres, presented as part of Kino in 2007, as well as Louise Archambault’s most recent film, Gabrielle. Television roles include Annie et ses hommes. Michael is also passionate about curling.

Edon Descollines is a visual artist, poet, dancer, and actor, and a graduate of Les Muses – Centre des arts de la scène, where he studied from 2005 to 2013. He is known for the expressive quality of his performances, for his creativity, and for committing himself, to his art, body and soul. As a professional actor-dancer, he was part of Leçons (Productions des pieds des mains), presented in 2004-2005 in Montreal and Belgium. In 2006, he had the chance to fly to Japan to present L’Ombre, a choreographic duo created by the same company. In 2010, he danced in Sylvain Émard’s Très Grand Continental at the FTA.  He also appeared in Louise Archambault’s film Gabrielle (2013) and Stéphane Lafleur’sTu dors Nicole (2014). As a visual artist, he often works with Exeko, where he exhibited as part of the event Tandem Créatif in 2013 and 2014. Edon also maintains a very personal and rewarding artistic practice in poetry and drawing.